September and October are always going to be odd months for us. Now we’re 4 years down the line we “should be” used to it. We “should be” fine; after all we’ve got Ophelia, we have our health, we’re happy in our jobs and we’ve just moved house and got our fresh start. And yet…..

“Should be” is now one of those phrases that can be very politely but firmly shoved up one’s posterior along with “at least” and “yes but”.

We plodded through September the best we could and we were snappy, grumpy and generally just peeved. It’s the white noise that’s in our brains blurring vision, sound and ability to process things in a “normal” way. I’ve come to accept that my way of processing has changed. Our “should bes” are the ones we “should be” having with Alexandra. This year I should be visiting primary schools and deciding where to apply to. My baby should be 4. How did that happen? How did time go so ridiculously fast and feel like it’s speeding up? I’ve moving away from my girl at an alarming rate and I’m desperately clinging onto anything that makes me feel close to her. The extreme stress, lack of sleep and painkillers during the hours of Alexandra’s life made it hard to remember every single moment and detail. I guess it was my brain’s way of protecting me from the horror that was unfolding.

And so September rolled through its days. I reconnected with a Mum friend and we spend hours talking and messaging each other ironing out foibles from the last couple of years. Essentially laying our cards on the table and I feel we strengthened the friendship. As I get older I’m starting to understand that “friends come and go, but for the precious few you should hold on to” a lot more. Friendships do change and maybe not in the way you expect but they do and they will. It’s how you take that on board is what matters.

I tried to keep busy in my own way. I started properly with my new Guide unit and start to learn many many names and overcome the difference in volume between 8 Rangers and 20+ Guides! I embark on my millionth attempt to stop biting my nails. I know this habit is engrained in me and I’ll be battling the urge forever. For me it’s connected with a form of my anxiety. It’s the physical let out when I’m not paying attention to what is mithering me subconsciously.

We filmed some videos with our friend Kate of Raising Minerva about Alexandra and these can be found here and here.

We had a really good weekend away with my Botswana Buddies and make plans for our 10 year anniversary next year. We enjoy being away in Cheddar doing touristy things, relaxing, eating, drinking and talking about anything and everything.

And just like that the end of the month appeared. We had a date night at the start of Alexandra’s birthday weekend. We went out for a meal and Andrew finally came with me to see Russell Howard (my long term telly comedian crush). We had a great night and it broke up the “what do we do” thoughts? Stay at home? Look through photos and cry? What the hell are we meant to be doing? 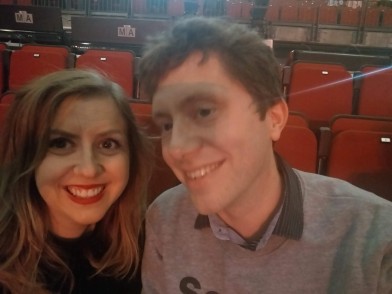 On Alexandra’s actual birthday we headed to the coast. Normally we would head to Whitby because it’s such a special place to me and now to us. However, dog restrictions on the beach meant we headed to Robin Hood’s Bay. The weather was awful. If it was any normal Sunday we would’ve canned it but as it was her day we made the best of it. We walked on the beach, ate fish and chips and jumped out of our skin when we heard the noon day cannon! For the first time I went to work on the anniversary of her death. I pulled up my big girl panties and did it. What was the alternative? Sit at home and stare at four walls? I know I’m not being a bad Mum to her by going into work that day and now I can say that I did it. Another weird achievement completed.

Baby Loss Awareness Week falls in between Alexandra and Ophelia’s birthdays so it’s also going to be a bit intense. This year we volunteered with Leeds SANDs on their awareness stand in the station. I’m not going to lie; it was hard. We were raising awareness through handing out tea lights for the Wave of Light. It’s not exactly a joy filled topic and thankfully no one gave us any abuse; most people just ignored us as they walked past. But there were a few people that specifically came to talk to us about their loss whether it was recent or decades ago.

I was also a parent speaker at a training day for Beyond Bea Charity. It was a while since I’d been a parent speaker and it was the first time I could prepare a proper presentation. I got to stay for the whole day and it was utterly fascinating to hear the other side; the professional side. How processes are put into play; how autopsies are ordered; what are blocks and slides? I wanted to be a pathologist when I was 13 (one too many episodes of Silent Witness) so I know this is one of my many oddities! I was nervous speaking but I made the attendees laugh, gasp and cry; the full lot of emotion and I got a message from a trainee midwife saying thank you and well done. So mission accomplished. Legacy forged.

I took part in the Wave of Light and was overwhelmed by the shear amount of photos that I saw. Way too many names. Way too families hurting. This isn’t just for loss families we want those outside to take part too. It’s a small but hugely impactful way of acknowledging our missing babies.

For Ophelia’s 3rd birthday (again how did that happen?!) she went to her childminder as normal and had a tea party. I then took her to a pumpkin patch with our friends who we met through SANDs and had a great time getting muddy, collecting pumpkins, going on a tractor ride and eating the best Olaf birthday cake.

I still can’t face organising full on birthday parties for O. I looked up a birthday package at a soft play and realised that I probably didn’t know enough kids for the minimum requirement which gave me mini meltdown thinking that O didn’t have many friends. People would flake at the last minute and I take this harder than I should. So we did our usual let’s go out for a day trip. We went to the National Emergency Services Museum in Sheffield with family and our friends from Manchester who we don’t see nearly enough as we like. O had a great time running around all the exhibits and trying things on and having 2 rides on a fire engine.

And just like that we’d got through our most intense 6 weeks of the year (probably). We’d remembered Alexandra, carved out more of her legacy and celebrated her life and gave Ophelia a great birthday even it was low key.