Just a little write up about our weekend in Edinburgh at the festival for Andrew’s birthday.

We’ve well and truly checked our privilege and freely acknowledge we couldn’t go as often as we do or at all if Andrew’s parents didn’t live in Edinburgh. Andrew’s Scottish and never went until a few years ago! The price of accommodation is ridiculous – apparently one of the Ibis hotels has a digital sign outside with a constantly updated overnight price and at one point was £200+!

We’ve tended to base our festival around an act that we know is appearing and take it from there. Until this year we’ve never braved it into an act that we’ve been flyered for but this year we did and we’re so glad that we stepped into the unknown.

For our first couple of festivals we based our trip around The Axis of Awesome (both pre and post Jordan coming out as trans – is that the right phrase?) and for the last couple of years for me it’s been all about Lou Conran (LOVE HER!) but she wasn’t doing a run this year so we had to get out the catalogue and leaf through.

So I made a list of shows that we wanted to see. Russell Howard was sold out (le sob!) but as we’ve got tickets to see him at the start of Alexandra’s birthday weekend in September I wasn’t too devastated. We ditched the baby disco to create time to see family and friends and I’m still outraged that no-one wanted to do silent disco walking tour with me! They look like such fun!

Friday night started with Free Footlights – basically lots of different acts from mainly the current members of Cambridge Footlights and we went so hopefully we can say that we saw so and so before they got famous. The acts change every night. We expected (and got) a mixed bag. The act that stuck out for me was: Mark & Haydn (mainly because I can remember their names!) but there were others that really had us laughing especially the lad telling an over-elaborate cowboy story turning the audience into the BBC sound effects department. I saw Haydn in the audience for Lucy Porter the next day and said “well done – especially the Northern accent!” Andrew said his parents beamed – yay good deed done.

As we were waiting in the bar for the Footlights show we were approached and got chatting to Gabe Mollica. I remember our friend Sophie saying that when she was in shows in Edinburgh that flyering was just soul destroying so as he seemed like a good egg we trolled on in after the Footlights. An extremely heart warming and self-deprecating show about love, comedy and rice cakes. I’m definitely going to use the word “comedy” as a verb. To comedy, he, she, they comedy. Yep works. Honestly, as a whole package I definitely enjoyed this show more than the Footlights… controversial?!

As we left, I was gutted to realise that as it was our first night we hadn’t broken enough notes and was mortified that we hadn’t tipped an American properly. Definitely needed to fix that later on in the weekend! When I was on study abroad, I remember being asked in a history class why the British were so bad tipping and had to explain the concept of the National Minimum Wage and that we don’t really have a tipping culture. This was in 2004 and in a time of $2 to the £ and the question asker was blown away by how much she could earn on an equivalent wage as wait staff in the UK.

Saturday (Andrew’s birthday – he’s now caught me up to the grand old age of 34) was reserved for spending time with family and friends and our shows were booked in the evening. I’d heard that Lucy Porter was doing a show about Scouting and Guiding, and it was going to be positive and not ripping the movements to shreds so of course we had to go and of course we had to go in uniform. Andrew forgot his which caused a domestic on the train, so we sent his Dad out to the Edinburgh Guide shop to get a new one! Obviously, we sat on the front row and got involved with the show. I had to help give out badges and made the recipients do the salute and hand shake properly – standards. As result I earned the “I was helpful” badge. We chatted to her after the show and just said thank you. We’ve got nearly 30 years of volunteering experience between us and some the abuse that can be hurled at us can really start to drag you down. The “thank yous” we get really make it worthwhile.

Next up was Foil, Arms and Hogg. According to their poster this was their 11th year at the fringe but they only really came to my attention this year after their Brexit: The Divorce sketch. Barry & Beethoven was my favourite sketch. We saw Foil, Arms or Hogg a couple of days later at The Pavilion Café and again said how much we enjoyed the show. We’re big believers in positive feedback – there’s way too many negative comments by keyboard warriors and the like.

Sunday – we went to a kid’s show for Ophelia. We returned to the Milkshake and Dr Bubble show as last year’s was really fun. This year Ophelia really got into it – what a difference a year makes. She was absolutely enthralled. We’ll definitely take her again and start to take her to more adventurous things as she gets older. The afternoon was spent burning off steam in the National Museum of Scotland where O decided to test my heart rate by climbing on railings.

We were recommended the NewsRevue by our friends Paul & Becca last year so we returned this year. The cast changes every year and is always extremely topical. An absolutely brilliant show (and again we fed this back to a cast member as we crossed paths on the Meadows) The ending of the show as Le Brexit as Les Mis turned out to be quite emotional. Time to nail your colours: we were Remainers, we are Remainers and we will continue to be Remainers. Remain and Reform. It’s not often Andrew gives a standing ovation and that’s what they got!

After this we headed back over to the Mash House in an attempt to redeem myself over the improper tipping situation. We decided to wander into another random show: Ania Magliano and Matt Hutchinson: Mixtape. Andrew by now had a taste for sitting in the front row and generally being over enthusiastic; always positive we’re not the heckling type. Although I had a Miranda Hart moment when Ania said she was born in 1998; WTF that’s only just happened. Nope, that’s 21 years ago. Offft.

Hurrah, after this show we found Gabe in the bar. Tip redemption time! We quickly chatted again about his show and obviously ascertained relationship status given the premise of his show. Alas that means the search for a lovely bearded man for Hot Emily continues……

As we had a babysitter we decided to stay out in the biblical rain and thoroughly overindulged and had a great night yacking just the two of us reflecting on life, politics and the past 10 years of us being together. Yeah we suffered the next day: pleasure is always followed by pain. 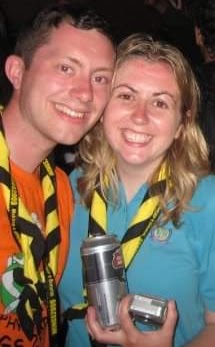 Monday was a slow day (!) and we had some quality time with O partaking in the playpark. For the first time in ages I just sat on a bench, enjoyed watching O play and thinking about how grateful I was to be there and wishing we had Alexandra to enjoy it with us. 4 years after her loss I feel that I am determined to try and enjoy as much of life as I possibly can. I want to make both girls proud in attempting to make the best of life.

Our final show was the excellent Flo & Joan – we saw them last year having only seen their Nationwide advert. All the songs were new and it was a sell out crowd. A great high note to finish our festival on.

If you can; I definitely recommend spending a few days at the festival and just go with it. I absolutely cannot wait for next year already!

Oh and also – I saw so many performers out and about how did I not run into Russell Howard?! I’m outraged!